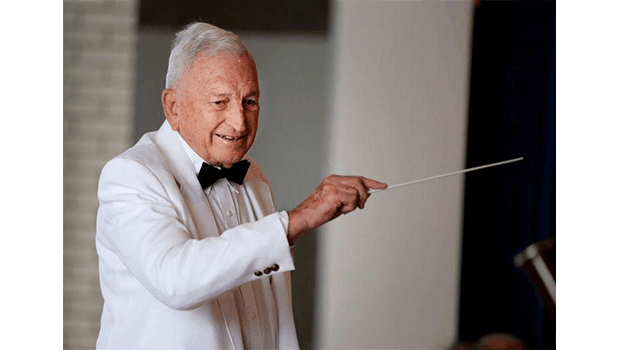 John DeYoung is from Pentwater Michigan where he was one of the founding members of the Pentwater Civic Band in 1947 that still performs today. After graduating Pentwater High School in 1945, John served in the US Army of Occupation in Germany. He earned a B.M.E. from Stetson University in 1952 and accepted the position of Band, Chorus and General Music Director at St. Cloud High School where he taught for eight years, during which time he met and married his wife Jo who was also a teacher. John earned an M.A. in Music Education from Florida State University in 1957.

John and his family moved to Bartow in 1960 accepting the position of Director of Bands at Bartow High School where he served as director for 24 years before retiring from that position in 1984. Under his leadership the Bartow High School Band ranked as one of the top performing and marching bands in the State. From 1976 to 1984 John also served as conductor for the pit orchestra for numerous musicals by the Bartow Performing Arts Council. After his retirement from Polk County Schools, he served as Convention Manager for the Florida Music Educators Association; continued to teach band classes at St. Paul’s and St. Joseph’s Church Schools in Winter Haven; served as the interim band director at Lake Wales High School (1986-87); served as the assistant band director at McLaughlin Middle School in Lake Wales (1996-98) and taught private band instrument lessons.

In 1990, after much encouragement, Mr. and Mrs. DeYoung started the Bartow Adult Concert Band that has performed seven concerts each year including a concert on the 4th of July. All performances are free and attract audiences of 800 to 1,000. On July 24, 2014, Mr. DeYoung announced his second career retirement at the age of 88 after 24 years. The following season the BACB joined with Bartow High School Band and the Florida Bandmasters Association to commission a march “Mr. Bartow March” and dedicated it to Mr. DeYoung. That march has now gone on to receive national attention in band music literature.

John served two terms as district chairman, with distinction as President of the Florida Band Masters Association and past President of the Florida Music Educators Association and was the first recipient of their 50 Year Music Education Service Award in 2013 and inducted into FMEA Hall of Fame in 2015. Mr. DeYoung served as an adjudicator at district events of the Florida Bandmasters Association for 40 years and was inducted into their Hall of Fame in 2004. During his 62- year career as a music educator, John has been responsible for teaching and training well over 50,000 musicians and has mentored and positively influenced the careers of both professional and amateur musicians.

His other distinctions include: 1976 Bartow Lions Club Outstanding Citizen Award; FBA Award for 35 Years of Distinguished Service (1952-1987); 1994 Spirit of Bartow Award from the Bartow Chamber of Commerce; 1999 Phi Beta Mu Outstanding Bandmaster Award; and 2004 Rotarian of the Year. The city of Bartow presented a Proclamation of Title to Mr. DeYoung as “Director Emeritus” on January 5, 2015 and the Stage at the Bartow Civic Center has been dedicated as the “John R. DeYoung, Jr. Stage for the Performing Arts.” In 2018 at the age of 91 Mr. DeYoung was accompanied on an honor flight to Washington D.C. as a World War II Veteran.

In 2018, Mr. and Mrs.DeYoung celebrated their 58th year in Bartow and their 64th wedding anniversary.

Published in Artist Hall of Fame