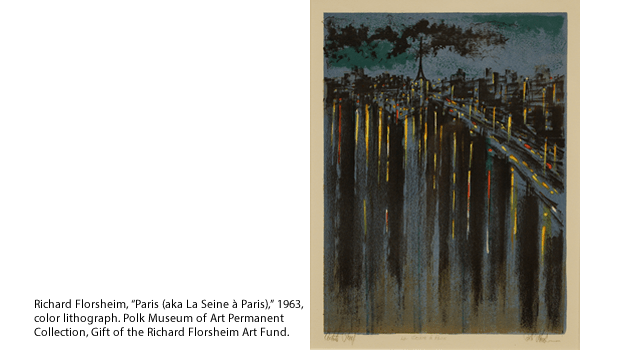 On exhibit through October 12 in the Perkins Gallery at Polk Museum of Art.

Richard Florsheim (1916-1979) was a prominent American printmaker, painter, sculptor, educator and writer. He graduated from the University of Chicago before studying art at the Museum of Modern Art and the Metropolitan Museum of Art in New York. He completed his formal art training in Paris at the Musée Nationale d’Art Moderne. Florsheim first gained international recognition in the late 1930s after exhibiting his work at such major institutions as the Salon des Refuses in Paris, the Pennsylvania Academy of Fine Arts, the Los Angeles County Museum and the San Francisco Museum of Art. He was a member of the Society of American Graphic Artists and the prestigious National Academy of Design. In 2004, the Richard Florsheim Art Fund donated 60 original works by Florsheim to the Permanent Collection at Polk Museum of Art. This exhibition will include a majority of those works and will mark the first time in a decade that these works have been on public display.