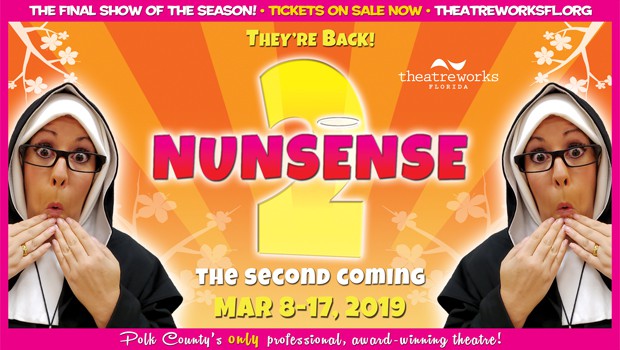 DAVENPORT, FL (Jan 1, 2019) – TheatreWorks Florida opened their 2018-19 season with the internationally acclaimed musical comedy hit, Nunsense, and are now preparing for the return of “The Little Sisters of Hoboken” in the hysterical musical sequel, Nunsense 2: The Second Coming. The production will open March 8-17, 2019 at TheatreWorks Florida Theatre. The world of Nunsense, created, written and composed by author Dan Goggin, has kept audiences rolling in the aisles for 35 years. It began as a line of greeting cards featuring a nun offering tart quips with a clerical slant. The cards caught on so quickly that Goggin decided to expand the concept into a cabaret show called The Nunsense Story, which opened for a four-day run at Manhattan’s Duplex and remained for 38 weeks, encouraging its creator to expand it into a full-length theater production. To date, it has spawned 6 sequels and 3 spin-offs.
Synopsis:  Nunsense 2: The Second Coming takes place six weeks after the sisters have staged their first benefit. The sisters are back presenting a “thank-you” show for all the people who supported them in the past. But now, they’re a bit slicker, having been “bitten by the theater bug.” Things get to off to a rousing start but before long, hysterical chaos erupts! Two Franciscans come to claim Sister Mary Amnesia (who has won the Publishers Clearing House Sweepstakes) as one of their own. At the same time the nuns hear that a talent scout is in the audience to see them strut their stuff. From the riotous bingo game run by Sister Amnesia to the hilarious duet, What Would Elvis Do?, to the rousing finale, this show will have you rolling in the aisles! Rating: Family Friendly.
Scott A. Cook, Artistic Producer/Director says, “Bringing the world of Nunsense to life for Davenport, Polk County and all of Central Florida is so exciting because even though this show has been around for 35 years, I am always amazed how many people have never seen it! The experience is truly a laugh riot in that rare, laugh-out-loud sort of way. If you love musical theatre, it is almost a “sin” that the shows are not on your hit list of top musicals. One important thing I would impress upon anyone who has never seen any of the Nunsense shows is it is NOT about religion or religious culture. It is all about simple, feel good laughter with some crazy characters that just happen to be nuns. The Nunsense shows have a cult following and we hope to add plenty of audience members to that following starting March 2019!”
Dan Goggin, Author, Composer & Lyricist, says of this Nunsense sequel, ”The original Nunsense was so popular all over the world that many producers were asking for a sequel. I figured if the nuns had so much fun putting on the first show they’d be itching to get back on stage. I created Nunsense 2 as a “thank-you” program to thank the people who supported their first show. There is something so unique about the “traditional” nun that fascinates people. And when they are put into zany circumstances, people can’t resist. Because the shows are performed in real time, it gives the audience a sense of being there in the moment. These days, with all the bad news, I think everyone is more than happy to spend two hours just having fun and forgetting what’s going on in the world.”

Last year’s original “Nunsense” show sold out within a few weeks of sales being announced. Nunsense 2: The Second Coming is already 40% sold. GET TICKETS TODAY before they’re gone!

READY TO PARTY?
Need a venue to hold your corporate or private party? We got you covered! We can provide a pre-show studio setup for your special gathering (must supply food and drink) and group discount rates to a performance of “Nunsense 2: The Second Coming”! For more information:groups@theatreworksfl.org | 407.340.0473
GROUP DISCOUNT RATES AVAILABLE!
Groups of 10, 20 or more receive discounts on single show tickets. Email: groups@theatreworksfl.org | Call: 407.340.0473
Nunsense 2: The Second Coming
Book, Music and Lyrics by: Dan Goggin
Presented by: Ledger Media Group