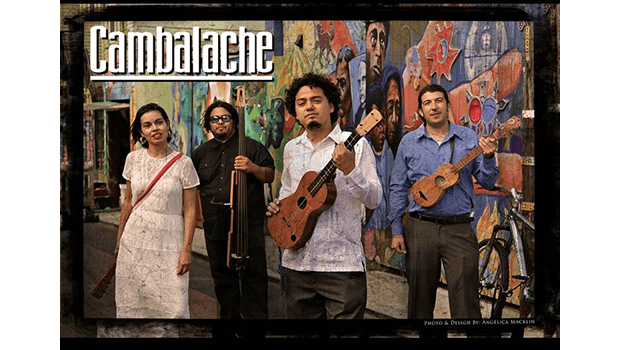 November 6 from 5:30-6:45pm, Cambalache, a Chicano-Jarocho group based in East Los Angeles, performs on on the Downtown Concert Series. The concert takes place in front of the Polk State JD Alexander Center in Lake Wales.

Cambalache, meaning exchange, is a Chicano-Jarocho group based in East Los Angeles. Founded in 2007 and led by César Castro (sonero, maestro and luthier from Veracruz, Mexico), Cambalache plays and promotes traditional son jarocho through performance, music workshops, and educational demonstrations.  In the spirit of the fandango, a traditional celebration of music and dance, Cambalache engages its audience through participatory performances.  In 2010, Cambalache organized an important fundraiser for victims of Hurricane Karl in Veracruz, thus strengthening decades of social and cultural exchange of the Chicano-Jarocho network.  Cambalache’s educational mission involves demonstrations from elementary school to universities, museums and music festivals.  The music of Cambalache was featured on August 7, 2011 on NPR’s All Things Considered stating, “Son Jarocho has been popular in Los Angeles, going back to the 1950s with Ritchie Valens, then Los Lobos.  Today, it’s a part of the regular soundtrack of Latino music in East L.A.”

After School Art: Form a DreamCatcher