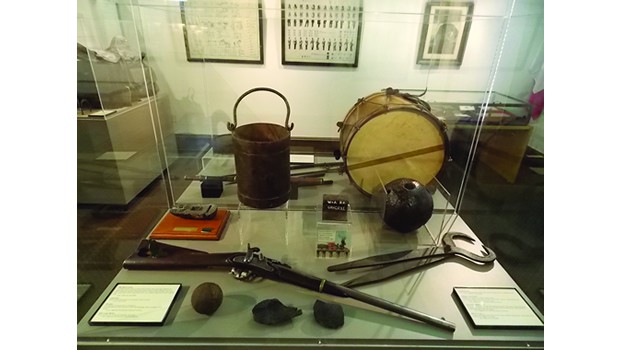 Exhibits Coinciding with the 150th Anniversary of the American Civil War

“Defending the Boundaries of Wilderness,” examines how men from Polk County fought on both sides of the Civil War. Uncover the histories of the Cow Cavalry, the South Florida Bulldogs, Union troops, and Colored Units who lived, fought, or settled in Polk County.

“Living on the Edge of Wilderness,” focuses on the lives of women and families on the home front of Polk County during the Civil War. Complementing the Civil War exhibits, the Genealogical Library will showcase family histories of Confederate veterans. Maritime artifacts and information about Civil War naval history will also be on display. Activity books will be provided at no cost to guide families and children through the exhibits, and children will have the opportunity to examine reproductions of items Civil War soldiers carried and used during the war.

November 6, 1860 – Abraham Lincoln, who had declared “Government cannot endure permanently half slave, half free…” is elected president, the first Republican, receiving 180 of 303 possible electoral votes and 40 percent of the popular vote.

February 9, 1861 – The Confederate States of America is formed with Jefferson Davis, a West Point graduate and former U.S. Army officer, as president.

March 4, 1861 – Abraham Lincoln is sworn in as 16th President of the United States of America.

January 1, 1863 – President Lincoln issues the final Emancipation Proclamation freeing all slaves in territories held by Confederates and emphasizes the enlisting of black soldiers in the Union Army. The war to preserve the Union now becomes a revolutionary struggle for the abolition of slavery.

July 1-3, 1863 – The tide of war turns against the South as the Confederates are defeated at the Battle of Gettysburg in Pennsylvania.

July 4, 1863 – Vicksburg, the last Confederate stronghold on the Mississippi River, surrenders to Gen. Grant and the Army of the West after a six week siege. With the Union now in control of the Mississippi, the Confederacy is effectively split in two, cut off from its western allies.

November 19, 1863 – President Lincoln delivers a two minute Gettysburg Address at a ceremony dedicating the Battlefield as a National Cemetery.

March 4, 1865 – Inauguration ceremonies for President Lincoln in Washington. “With malice toward none; with charity for all…let us strive on to finish the work we are in…to do all which may achieve and cherish a just, and a lasting peace, among ourselves, and with all nations,” Lincoln says.

April 14, 1865 – The Stars and Stripes is ceremoniously raised over Fort Sumter. That night, Lincoln and his wife Mary see the play “Our American Cousin” at Ford’s Theater. At 10:13 p.m., during the third act of the play, John Wilkes Booth shoots the president in the head. Doctors attend to the president in the theater then move him to a house across the street. He never regains consciousness.

In May – Remaining Confederate forces surrender. The Nation is reunited as the Civil War ends. Over 620,000 Americans died in the war, with disease killing twice as many as those lost in battle. 50,000 survivors return home as amputees.