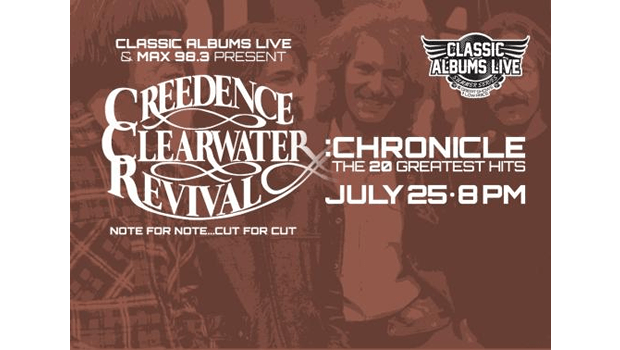 Features a special pre-show beginning at 7:30pm with Eric Michaels and Mike Lee from the popular Max 98.3 morning show.

In addition to performing each the iconic album note for note and cut for cut, Classic Albums Live also presents a full set of the artist’s greatest hits during the second half of the performance.

Chronicle, Vol. 1, also known as Chronicle: The 20 Greatest Hits, is a greatest hits album by American swamp rock band Creedence Clearwater Revival. Released in January, 1976 by Fantasy Records, the album was released teh same time as the single release of “I Heard it Through The Grapevine.” It is the best-selling album in the band’s catalog, making eight times Multi-Platinum by the Recording Industry Association of America. The compilation was ranked at number 59 in the updated version of Rolling Stone’s list of the 500 Greatest albums of all time. It has sold 6,357,000 copies in the US since 1991 when Nielsen SoundScan began tracking sales for Billboard.

Classic Albums Live has been a hugely successful and exciting concert attraction ever since it began in 2003. The series has received rave reviews from fans and critics alike, and with its huge popularity has expanded to include such major markets as New York, Orlando, and Atlantic City.