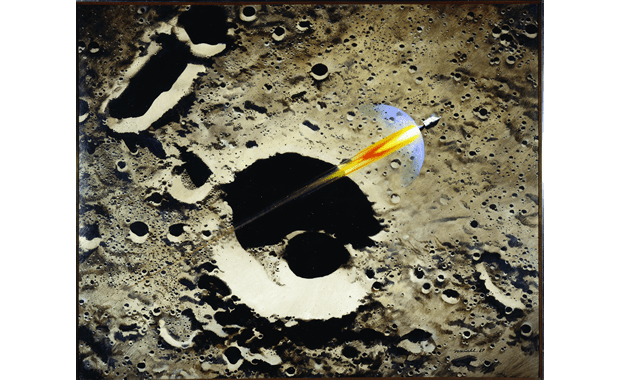 Paintings of the Space Age and Regenerations2 Exhibitions End December 7

Polk Museum of Art is proud to welcome an exhibition of large-scale paintings depicting space exploration from the Smithsonian’s National Air and Space Museum. The exhibition Paintings of the Space Age will be on view through December 7.

Although the National Air and Space Museum is known internationally for its impressive collection of objects and crafts pertaining to America’s history in aviation and space exploration, it is less known for having a collection of artworks. With help from the Smithsonian’s Affiliations Program, the Polk Museum of Art will exhibit a sampling of paintings produced in the 1960s after James Webb, administrator of the National Aeronautics and Space Administration, suggested that artists be enlisted to document the historic effort to send the first human beings to the moon. NASA dispatched some of the nation’s foremost artists to NASA facilities with an invitation to paint whatever interested them.

The exhibition Regenerations2: Tomorrow’s Photographers Today is produced by the Musée de l’Elysée, Lausanne, in collaboration with the Aperture Foundation, New York, with the support of Pro Helvetia.  The exhibition will be on view through December 7.

Following the success of the 2005 book and exhibition, which traveled to 10 different cities across North America, Europe and Asia, this second edition, reGeneration2, turns the spotlight on new, up-and-coming talents from 31 countries. Curators at the world-renowned Musée de l’Elysée in Lausanne, Switzerland, selected the most promising candidates from some 700 entries submitted by 120 of the world’s top photography schools. The resulting publication and exhibition reveal the flexibility of young photographers as they pass fluidly from one genre to another and/or one technique to another. This exhibition will include 105 photographs by some of the world’s most promising young talents.

Museum Hours are Tuesday – Saturday, 10am – 5pm and Sunday 1-5pm. The Museum is closed to the public on Mondays & major holidays.

*Special exhibitions or events may have different admission fees or hours.