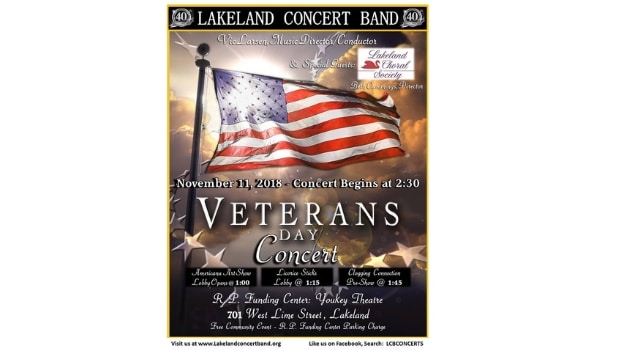 We kick off our 40th anniversary season with a Patriotic Arts Spectacular. Our annual Salute to Veterans concert will be Sunday, November 11, 2018 at the Youkey Theatre in the RP Funding Center. Doors open at 1:15, pre-show at 1:45, and the band concert begins at 2:30.

The concert is free and no tickets are needed. (The Center has a parking fee.)

The Band will be joined by the Lakeland Choral Society, directed by Beth Cummings, for a rousing concert of patriotic music — songs from Irving Berlin and George M. Cohan, marches by Sousa, American folk songs, and so much more. We will honor the service of our vets by presenting the flags from the military services of the United States and Canada.

The festivities begin in the lobby before the concert. Local artists will exhibit their works for your enjoyment — paintings, photography, woodcarving, and more.

You’ll be welcomed by patriotic music from the Licorice Sticks, featuring the Band’s clarinet section.

The pre-show features the Clogging Connection, a Plant City-based dance team that has appeared in local and regional competitions since the 1980s.

Instrumental music, singing, visual arts, dancing! It will truly be an afternoon of Arts and Fun!

Our concert is sponsored in part by Visit Central Florida — where the arts, nature, history, sports and nearby beaches and attractions combine to create the ideal place to visit.

An evening with Polk County Supervisor of Elections Lori Edwards