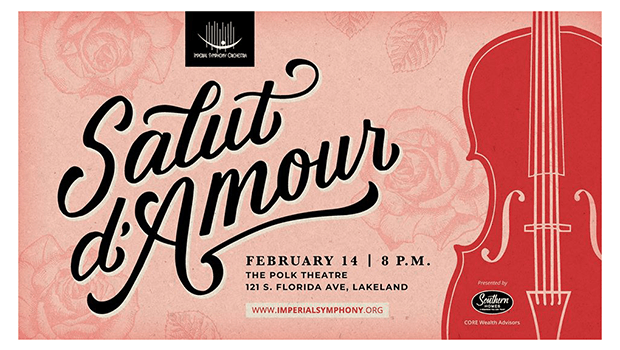 Pre-concert lecture begins at 7:15 p.m. in the theatre. Concert begins at 8:00 p.m.
Tickets: $39 – Gold, $29 – Silver, $19 – Bronze / Ticketing fees may apply
Students FREE with student ID or parent ticket purchase
Salut d’Amour is presented by Southern Homes of Polk County and supported by CORE Wealth Advisors.
About the Guest Artists
Nina Kim, violin
Nina Kim was born in Kamchatka, Russia, and started her professional education in violin performance at the age of six. While studying at the Yelizovo Music School in Russia under the tutelage of Marina Selezneva, she became a multiple winner of district and regional competitions and received the Gubernatorial Fund Scholarship.
In 2016 Nina was appointed as concertmaster of the Imperial Symphony Orchestra (Lakeland, Florida). She is now pursuing her doctorate degree at the Florida State University, where she combines the roles of graduate assistant to Dr. Shannon Thomas, concertmaster of the FSU Symphony Orchestra and first violinist of the Eppes Quartet, FSU’s string quartet in residence.
Edevaldo Mulla, cello
Edevaldo Mulla, an Albanian native, has widely been heard in concerts throughout Europe and America. Performing as a soloist, he has collaborated with multiple orchestras such as Sarajevo Philharmonic Orchestra, Quincy Symphony Orchestra, Space Coast Symphony Orchestra and Fresinger Chamber Orchestra among others. The Boston Musical Intelligencer described him as “a Byronesque extrovert who conquered the virtuosic demands and never lost touch with songfulness and romance” (2014).
Mulla started his professional musical education at the age of six. He received his Bachelor of art from the Academy of Arts in Tirana (Albania) under guidance of Professor Astrit Selita, and his Graduate Performance Diploma from the Boston Conservatory, representing studio of Andrew Mark and Holgen Gjoni. Mulla recently completed his Master’s degree from the University of South Florida in Scott Kluksdahl’s studio.

Spirits: African and Oceanic Art from the Dr. Alan and Linda Rich Collection

Steven Chayt: Some Call It Art

Josephine Sacabo: Those Who Dance