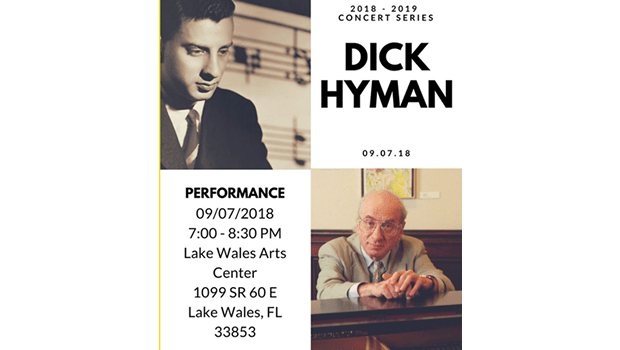 A performance at the Lake Wales Arts Center on September 7 at 7pm. $30 members/$35 nonmembers.

Richard Hyman is an American jazz pianist and composer. Over a 60-year career, he has functioned as a pianist, organist, arranger, music director, electronic musician, and, increasingly, as a composer.

While developing a masterful facility for improvisation in his own piano style, Mr. Hyman has also investigated ragtime and the earliest periods of jazz and has researched and recorded the piano music of Scott Joplin, Jelly Roll Morton, James P. Johnson, Zez Confrey, Eubie Blake and Fats Waller, which he often features in his frequent recitals.

In addition to his activities in the jazz and concert worlds, Mr. Hyman has had a prolific career in New York as a studio musician and won seven Most Valuable Player Awards from the National Academy of Recording Arts and Sciences.

In years past, Dick Hyman was music director for Arthur Godfrey as well as orchestrator of the hit musical Sugar Babies.

He has served as composer/arranger/conductor/pianist for the Woody Allen films Zelig, The Purple Rose of Cairo, Broadway Danny Rose, Stardust Memories, Hannah and Her Sisters, Radio Days, Bullets Over Broadway, Mighty Aphrodite, Everyone Says “I Love You”, Sweet and Lowdown, The Curse Of The Jade Scorpion and Melinda and Melinda. Other scores have included Moonstruck, Scott Joplin, The Lemon Sisters, and Alan and Naomi.